In this day and age it’s pretty rare to find a legitimate mystery. To be honest when I first came across this question I expected to just google it and find the answer, and was pretty scandalized when that didn’t immediately work. While digging up information on pink elephants didn’t involve much scrolling through microfiche or family records, it was still pretty fun to put in some internet detective work.

Multiple times when routing potential road trips towards the Midwest I’ve come across the same thing: large pink elephants. Recently I drove to Louisville from Atlanta and there were a whole mess of them scattered around northern Tennessee and Kentucky. Upon looking into it, I now know that they spread up into the Midwest and can be found around Indiana, Illinois, and up into Wisconsin.

Why are there so many pink elephants? Why would so many businesses chose this as their mascot? Was it a trend at one time?

I typed these questions with several different phrasings into google and dropped down a couple of internet black holes and found out very little. In response to the pink elephant in Northwest Nashville someone had written to the local NPR asking about the pink elephant phenomenon as they remembered seeing more of them around Tennessee when they were younger.

What I found out from this article was only that the elephant at a car dealership in Nashville is actually the second of 2 pink elephants to stand on the spot, and nobody really knows what happened to the first one or why it’s tradition to have a pink elephant there. I can only throw so much hate at that article since I’m about to write almost the same one which will ask lots of questions and answer very few.

What they did find out was that original pink elephant at University Motors was a different elephant. They also found out who made that particular elephant. They reached out to FASTKorp out of Sparta, Wisconsin and while the company denied the current elephant is one of theirs they say that the original elephant was. It’s not currently on their website as one of their elephant designs but since they won’t answer MY emails I’ll have to take Nashville NPR’s word for it.)

This does solve the mystery of who manufactured some of the pink elephants. University Motors original elephant is a match to another elephant at another car dealership in Clarkesville, Tennessee. But is this the actual same elephant somehow moved to a different car dealership, or simply another FAST Korp elephant from the same mold? The weird  toupe of hair that appears to be painted on the elephants head in the original newspaper photos suggests maybe this is another elephant but he could have simple gotten a new coat of paint, although from the looks of things, not particularly recently. As a counterpoint though, how long do elephants realistically keep the exact same pair of glasses?

I found another article that claims that the pink elephant that’s been sitting in a gas station in DeForest, Michigan since the 1960’s, was among the very first pink elephants. Made by Wisconsin local Sculptured Advertising, the first one (a no sunglasses version) was installed in front of Pink Elephant Supper Club in Marquette, IA. After this pink elephant, other pink elephants, these with sunglasses were produced for Arco gas stations in the area which all for a time, displayed pink elephants. Sculptured Advertising went on to change their name to you guessed it, FAST Korp. I haven’t managed to find any old photos of Arco’s with elephants in front of them but man, people sure did love the Noah’s Arc set of animals they used to sell.

Pink elephant in DeForest, WI claiming to be one of the first

I located this original elephant from Pink Elephant Social Club. Although the club has since closed, the top hatted elephant is still in Marquette, where they have a slightly more detailed story of it’s origins. They claim that pink was originally made for a 1964 Republican Convention in Sparta Michigan, and was normal elephant grey. Once it became homeless after the convention and drinking laws changed in Iowa, the elephant was adopted by the new club and painted pink. My only impression of the symbolism of pink elephants comes primarily from a scene in Dumbo, and is that they denote hallucination or drunkenness. So a pink elephant mascot for a bar formed under new drinking laws make perfect sense. What they have to do with gas stations or the other businesses Ive found with pink elephants, I have no idea.

Same pink elephant now on the waterfront in Marquette Iowa

At some point in time Fast Korp was capitalizing on the pink elephant’s drink associations and also producing elephants holding martini glasses in their trunks. Rumor is some of these also had glasses. I found one of these tipsy elephants next to an antiques malls in Cross Plains, Tennessee, just over the border from Georgia. This one has been given a circus headdress paint job and lost the base of its glass. The shape of the ears and wrinkles on the legs tell me this is a FAST Korp elephant modified from the originals to accommodate the glass.

As an aside, the FAST Korp piece of the puzzle also solves another mystery unrelated to the pink elephants and instead related to cows.

One of my very first big things was a giant cow at a gas station in Ashburn, Georgia on the way north from Florida. Several years later I took a photo with another cow in another small town, Guthrie, Kentucky. The cow in Guthrie is wearing glasses. Upon looking at the pictures I realized that aside from the glasses and slight paint job variations, they were the same cow. 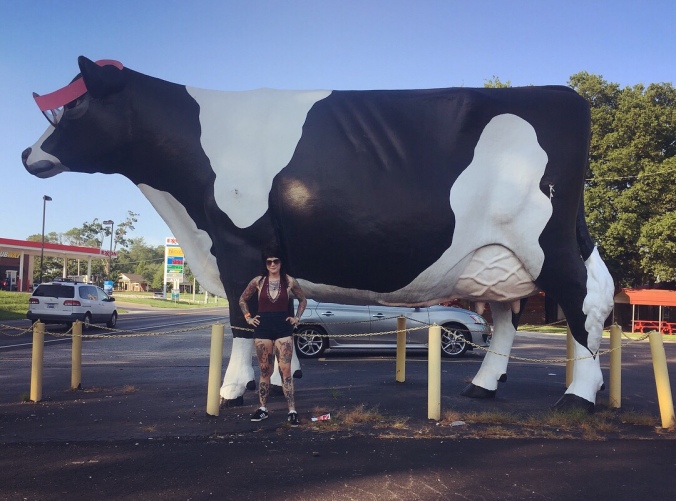 You can just throw a pair of glasses on and fool me! This cow is still among the large animal offerings on the FAST Korp website. Guess they were really into making glasses that fit their animals.

The reasons for the apparent explosion in popularity the pink elephant seems to have enjoyed remains a mystery. Why they ended up extending from bars to gas stations, salons, and antique stores as a favorite business mascot I don’t know. Since their glory days though, the pink elephants seem to have scattered. One remains at a desolate feeling liquor store in Hopkinsville kentucky and another resides gas station conveinence store in Guthrie, Tennessee. Like the car dealerships, nobody seems to know why exactly a pink elephant. 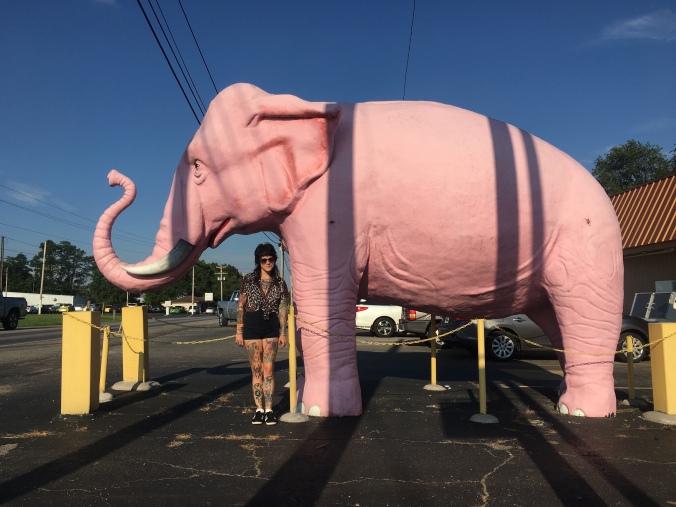 This isn’t even near a completely satisfying explaination for roadside elephants are all over the United States. It’s also not near a complete list. When discussing this mystery with some friends of mine, I found my friend remembered not one but two in her hometown of Springfield Illinois, one of which has now been painted green, and one that’s holding a martini glass. Do you have a Pinky in your hometown? Know anything about it’s history? Pop in the comments or email me!